Just added to your cart

CKAero is at a new location! Our new address is 14245 Leayn Ct, Denham Springs, LA 70726 and we are working to update it everywhere. Please bear with us if you notice the old address in a few places. Thank you!

Most of us who use LiPo batteries recognize that there’s some risk involved. The things have been overcharged, shorted, cut, nailed, etc. in numerous YouTube videos that dramatically demonstrate the potential to make smoke and fire. There are also a variety of methods offered to minimize risk and manage a fire, with some being better than others.

Let’s look at the materials and construction of a LiPo to better understand what happens when things go wrong. The typical pack used in R/C consists of lithium cobalt cells in soft polymer pouches. For details of cell chemistry and options see: http://batteryuniversity.com/learn/article/types_of_lithium_ion

Note that the cells we use contain no metallic lithium. (Some early small packs sold to modelers for RX power used lithium metal anodes that grew dendrites which could short the cell and result in fire, these are no longer available.) The cathode is typically lithium cobalt oxide, a powder that is mixed with a solvent to form a paste and applied to an aluminum cathode foil. The solvent is then evaporated from the mixture. (Failure to remove all of this solvent can contribute to cell puffing when the cell warms.) Likewise carbon (graphite) powder is applied to the copper anode. Surface area of the cathode and anode defines the cell capacity and many layers are folded to achieve the desired cell capacity. The coated cathode and anode are separated by a polymeric material that allows ion flow and keeps the two from shorting. The final component is an electrolyte, typically lithium hexaflorophosphate. This stuff is a power that makes tons of smoke if exposed to moisture. The powder is mixed with a solvent to form a gel, assembled into the cell in an ultra-dry atmosphere, and the pouch is sealed.

OK, so what are the dangers and how do they occur? Obviously fire is the primary danger. Please note that a LiPo fire is a polymer (plastic) fire rather than a lithium metal fire. So why do they erupt so violently? Rapid heat rise in a sealed container caused by shorting, severe overcharging, or deep discharge. Simply put, lots of electrical energy being converted into heat very fast.

During a deep discharge, a weak cell in a pack may overheat and expand enough to rupture the cell pouch. There may be smoke from heat and the electrolyte reacting to moisture in the air or not. I had a cell rupture and dump many feet of separator material into the airplane without a hint of smoke or fire. Typically there’s no fire as the depleted cell doesn’t generate enough heat.

Overcharging should be a thing of the past. Use a “modern” charger that also connects to the balance leads and monitors cell voltage during the charging process. If things go wrong the charger senses the problem and shuts down. I prefer charging single packs, as compared to parallel charging of several packs. The reason is that each cell is monitored individually rather than several in parallel. I also install an automotive fuse of 5A or so above planned charging current in one of the main charger to battery leads. This will provide protection in the event of an internal short in the charger (it happened to me) or if the leads are yanked from the charger with the battery connected. Pretty much guarantee they’ll get together and provide entertainment. In the event something does go awry in the charging process it’s best to have the packs contained in something fireproof. I use a “bunker” built of ceramic floor tiles top and bottom with a brick surround. 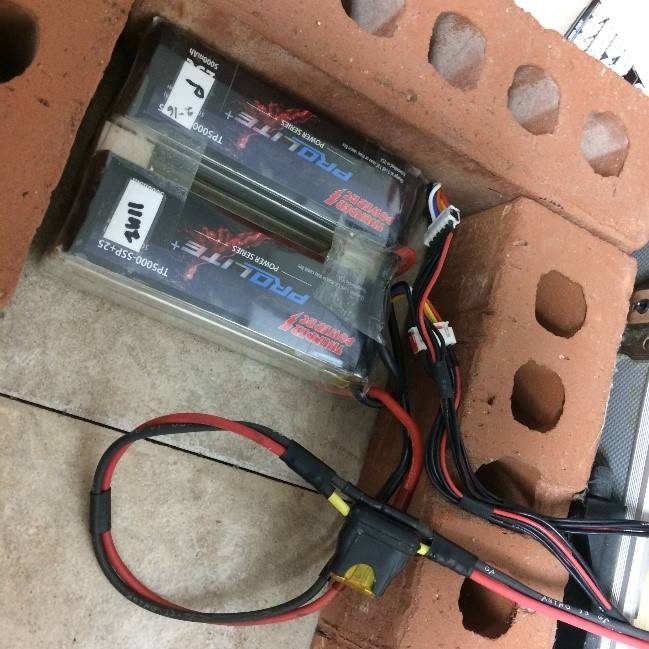 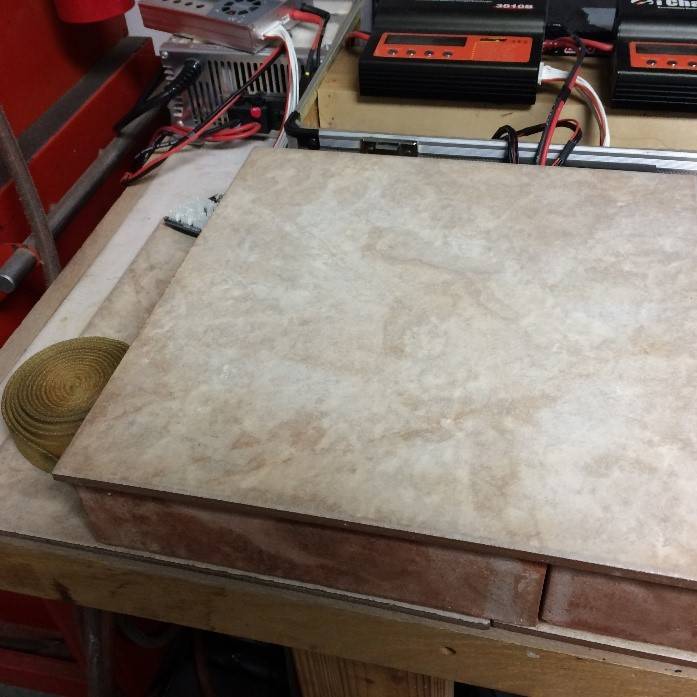 A short is the worst case scenario (overcharging creates the same effect in slow motion). The extreme current flow results in very rapid and extreme heat rise resulting in catastrophic cell pressure rise. The pre-fire squeal sometimes heard is the pressure escaping from a split in the pouch. Often the squeal is followed by copious amounts of smoke. The plastic and other chem in the cell is way above ignition temp, generating flammable gasses which ignite upon exposure to air, and produce the torch effect seen in LiPo fire videos. 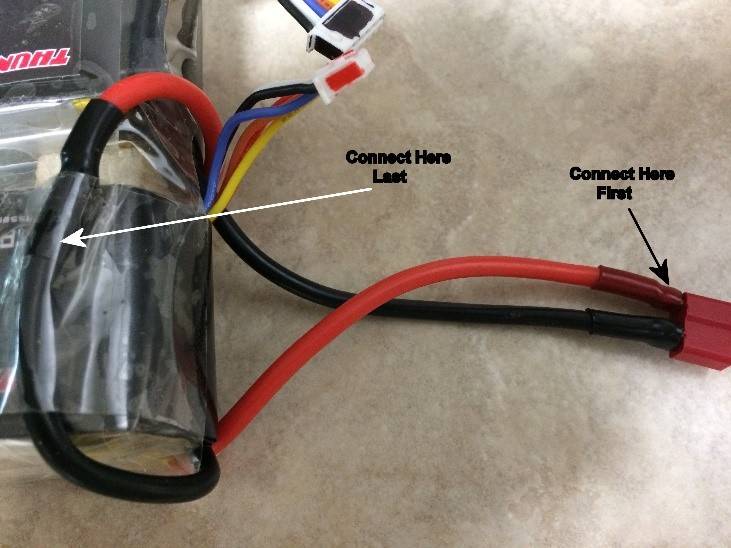 Shorts can occur due to an ESC or motor failure, crash damage, or connector accidents. Events from ESC / motor failures may be limited by adequate cooling and setting the ESC max current limit to about 10A more than max motor draw. Crash damage that seems minor can produce internal shorts that may not be immediately apparent. NEVER trust a damaged pack, transport, or store it. Plugging the bullet connectors of a pack together will get your attention. Attaching dual pin connectors (Deans) to the power leads must be done very carefully. Shorting the leads while soldering them to the connector will generate immediate excitement! The safest way I’ve found is to use 2 X 5S packs and solder the connector on first before completing the series connection to render the set a 10S. This allows attaching the connector without power on the leads.

Accidents do happen. Understand that the best fire extinguishing agent is water – lots of it. Don’t drop the things in a bucket of water though, as there may be enough heat to boil a lot of the water with the resultant steam ejecting hot water from the bucket and onto you. A garden hose will get the job done, as it will cool the pack below combustion temp – eventually. Just don’t let the things ignite something else for fear of applying water. Sand doesn’t work well in that the pack pressure blows the gasses through the sand and they continue to burn. Same for an ABC (and D) extinguisher, the cell heat generation will continue even if the fire is reduced. Absorbing the heat and containing the fire is the best approach.

There’s also concern of something shorting a pack in transportation / storage. Be very aware of the condition of balance leads and even more so of power leads. Whatever container is used for transport should not allow packs to move around and “abuse” leads or the ends of packs. I’m not sure just what the best practice for storing and transporting packs is. Individual packs in fire proof containers sounds good but is somewhat impractical with large packs. The flammable gasses from a critical pack will generate lots of pressure and burn when sufficient air is present. Containing these gasses isn’t really practical or safe. Certainly there’s a high probability that a torching pack will set off others in the same container. Consider the options and make a choice that best fits your needs.

Even the best LiPo will give up the ghost eventually and will need to be disposed of. While placing in the trash is fine, give the trash guys a break and discharge the pack first. I find the easiest and fastest way to do this is to use an electric water heater element wired with the necessary connector. Draw is about 3A on a full charged 10S. Simply connect and put in a safe (outdoors) spot overnight. The element will get a bit warm, so putting it in a bucket of water is a good idea if pets might mess with it. The pack will be puffed and stone cold dead the next morning.

The batteries, glow fuel, gasoline, or jet fuel used to provide the energy we need to fly our airplanes can create problems if that energy is released in an uncontrolled manner. It’s our responsibility to understand the risks involved with each and to manage those using safe practices to ensure those risks are minimized. With care, and an understanding of the issues, LiPo packs provide an excellent and safe power source for pattern.